Hazel, which opened in June 2016, is Rob Rubba’s first solo act. The chef, who entered the culinary world by accident while trying to pay for an art studio in Philadelphia, has bounced around America working for some of the biggest names in the business.

His first job was in the pastry department at Connecticut’s Mohegan Sun casino, under the watchful eye of his uncle who was executive chef. There, Rubba’s claim to fame was making Dan Ackroyd’s 50th birthday cake, complete with a white chocolate cone head. Soon after, he switched to savory, dropped out of art school, enrolled in culinary school, and launched his whirlwind, Michelin star-studded career.

He first worked at Todd English’s restaurant in the Connecticut casino, but quickly decided if he was going to pursue his dreams, he needed to head to New York City. He landed a job at Gordon Ramsay’s restaurant in the London Hotel, which was awarded two Michelin stars almost immediately. He proceeded to work his way up in some of the best kitchens around the country, including Guy Savoy in Las Vegas,  L20 in Chicago and George Perrier’s Le Bec-Fin in Philadelphia.

Rubba and his wife originally moved to D.C. to work for Frederik De Pue at Azur, which turned out to have a quick curtain call. He met Michael Babin, the President of Neighborhood Restaurant Group, soon thereafter, and immediately knew he found a home with the company. Rubba ran Tallula in Arlington, while fleshing out the concept for Hazel, his 38-seat dining room that serves as an ode to his experimentation with international cuisines. Since its opening, Hazel has received 2 1/2 star reviews from both The Washington Post and Washingtonian, and has received accolades from Food & Wine, Travel & Leisure, Zagat, Washington City Paper and Eater.

Hazel made it to the Bib Gourmand list by Michelin Guide.
https://guide.michelin.com/us/washington-dc/dining-out/behind-the-bib-hazel-in-washington-d-c/news 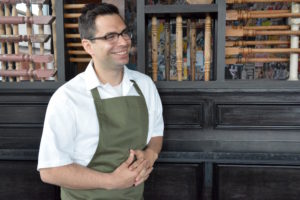